About Unity Day, A Note from Lynn Winterboer:

Dear Friends, I’m very excited to support Em Campbell-Pretty’s book launch in Denver. The book is called Tribal Unity. The genesis for the book began with a blog post Em wrote on her website in 2014. That post is published below, with her permission. Before you read it, you might also want to know that Em is launching her book in Denver, Colorado in honor of our friend, Jean Tabaka. She refers to Jean in this post, but as you know, we lost Jean a few months ago and it’s somewhere between jarring and comforting to see her words and her work still reaching us today.  Without further delay, here’s Em’s post: 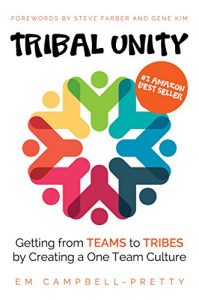 It recently occurred to me that I have yet to share the history and context of Unity Day, our often referenced iteration kick off event. Given the creation of Unity Day is actually one of the pivotal moments in the history of the EDW Release Train, it is time to close this gap.

For me our first Unity Day marked the beginning of our cultural transformation. The idea was the result of a retrospective with my extended leadership team. It was only weeks after we had decided to establish an Agile Release Train and we had been preparing for our first PI / Release Planning workshop. In SAFe a PI is a fixed duration “super-sprint” in the range of 60-120 days. Each PI commences with a two day “all hands” release planning event, with full participation from both the Agile Release Train and its business stakeholders. During this session a high level delivery plan is produced for the PI. In our case, we did not have a funded backlog large enough to support a even a cut down one day PI planning event. At the time there was minimal demand for development on the EDW and we were barely keeping the full train occupied from one ten day sprint to the next.

After a series of rather amusing side conversations with my direct reports, where they each pulled me aside to explain we did not have enough demand in the pipeline, it was clear we were going to have to find another way. At our next leadership team stand up, I shared what I had learnt via the side conversations and acknowledged that a full day PI / Release Planning workshop was not in our immediate future. We agreed to retrospect on our journey to date before defining the way forward.

While reflecting on the demise of our first PI planning day, the team felt strongly that the biggest missed opportunity was team Unity. Sadly, despite most of the 100 people on EDW Release Train team having worked together on various aspects of EDW over the past couple of years, we didn’t all know each others names! The PI planning day was going to be the first time we would bring the whole team together and it was something we had been excited about. And so Unity Day was born!

Unity Day probably should have been called Unity Hour. It is an “all hands” meeting, first thing in the morning, on the first day of every iteration. It started life as a cut down version of PI planning, but has evolved into a much loved ritual that is at the very heart of our culture. Unity Day has constantly evolved over the past 18 months, with new segments and agendas being dreamed up all the time.

Our first Unity Das was a 90 minute adaptation of Dean Leffingwell’s 2 day Release Planning agenda. We opened with a session about the History of the EDW and Future Vision. This was followed by an overview of new development tools and practises and a summary of the work for the upcoming iteration. We introduced our Innovation Challenge and closed out the morning with an agile learning activity that seemed to be primarily focused on proving that Em’s hand eye coordination skills are questionable.

Over the next few months we quickly established a smorgasbord of activities from which we could build each fortnights agenda:

Shout Outs: Based on the Rally Software tradition of appreciations, people who have supported the team during the past iteration are publicly acknowledged. Shout outs can be given by anyone to anybody regardless of whether they are a member of the EDW Release Train.

Agile Learning Activities/Games: With Unity Day being an all hands meeting it provides a fantastic opportunity for shared learning. In addition to the rich learnings provided by these activities, our use of randomly generated teams helped people get to know each other through playing together. Some of the games we have used include: the Ball Point Game,  the penny game, the invisible maze, and the chair game to name a few. We even had the good fortune to have Jean Tabaka run her 1-hour Scaling Collaboration workshop with the team one Unity Day. 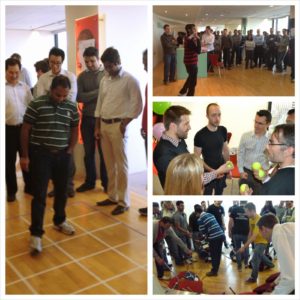 Team Building Activities: On occasion we have also chosen to invest time in activities that are less focused on learning and more about team building and fun. The team hakas were one of the most memorable team building activities, closely followed by the day the teams created product boxes where the team itself were the product. 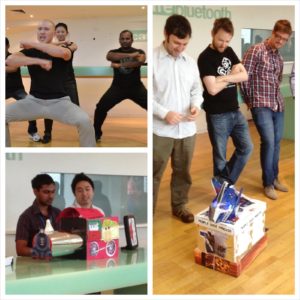 The Innovation Challenge: Each iteration with the support of our vendor partners, $100 cash was made available to the team that produced the most useful innovation during the prior iteration as voted by their peers (teams cannot vote for themselves). The winning team also took possession of the Innovation Cup. 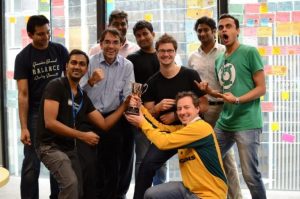 Fundraising: From time to time members of the release train choose to participate in community fundraising events. A spot on the Unity Day agenda is often reserved to promote the event or to put out a challenge. Over past couple of years, I have witnessed a Movember – “Parade of the Mos” cumulating in a dot vote for the best Mo; one of the guys committing to a public leg waxing if we raised over $1000 in the World’s Greatest Shave; and, the consumption of a raw onion as a result of this years Movember target of $1500 being exceeded. 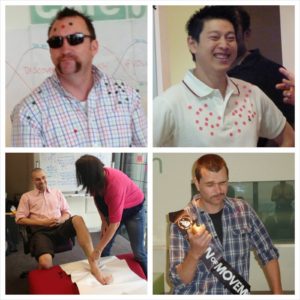 Our Customer Connection: Invitations are issues to those sponsoring work being delivered by the EDW Release Train, to come and talk at Unity Day about their project, why it is important to the company and how the work the team is doing will assist them achieving their goals. This section was inspired by the Business Context agenda item on the SAFe PI / Release Planning agenda. 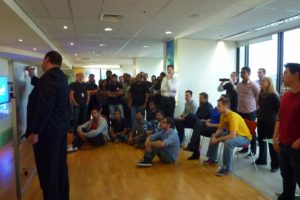 Team Updates: A series of three minute segments, where each team shares highlights from the past iteration. These ranged from a read out from the team, to short skits, slideshows put to music and even pictionary. One of the most memorable team updates was when one of the scrum masters orchestrated an Agile X-Factor, where team updates were rated on
according to their “A-Factor”. 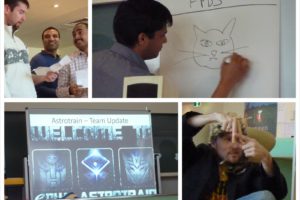 Architectural guidance: Is pretty much exactly what it sounds like, an update on architectural decisions impacting the release train. Even this section has been known to provide entertainment to the troops, through Dave’ Restaurant Tips and Fireside chats. 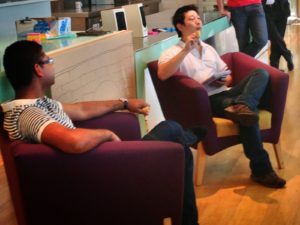 Snacks:  Regardless of the agenda for the day, if you want to keep 100 odd people focused at 9am in the morning provide food!

Theme Days: Now and then just for fun embrace a theme, whether it be “Dress Like a Pirate Day,” Halloween or Christmas, it always keeps things interesting. 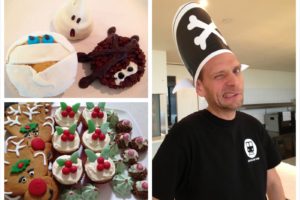 When I look back and think about how I would have reacted as a business sponsor if the IT Program Director had told me that he wanted the EDW Delivery team to down tools for an hour once a sprint to “play games”, I fear I would not have been open to the idea. 18 months later I can’t think of anything more important to the teams wellbeing than this one hour escape from reality at the beginning of every sprint.  I still remember the day I realised the difference Unity Day had made to the culture of the EDW Release Train. I was walking the floor and noticed that people were in the “wrong” team areas – then I realised that it wasn’t people in the wrong space, it was people collaborating across the train, sharing knowledge and supporting each other. I couldn’t wipe the grin off my face for days.

It is hard to do Unity Day justice via a blog post as you really have to see it to believe it. Hopefully this story and the accompanying photos have given you a taste and maybe you will try something similar with your own teams.

The book launch is scheduled in Denver October 27 2016 at the PPA Events Center. RSVP here to attend!

And a last note on this post, from Jean Tabaka: 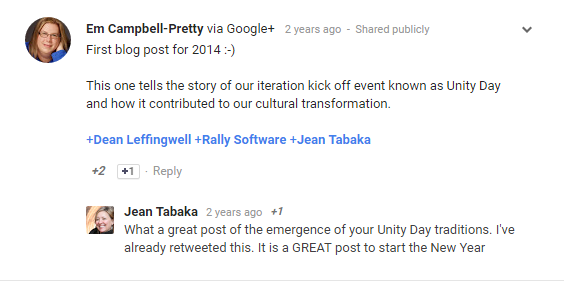